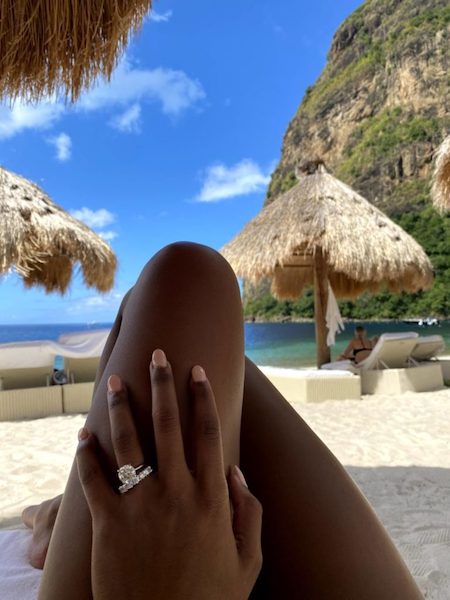 In honor of February, the month when all the feels are extra heightened + love floats around the air, I wanted to finally share a few of my favorite snaps from the one weekend that felt more intimate than any Valentine’s Day ever could… Our Honeymoon!

The morning after Todd + I said “I do” he whisked me away on a little mini-moon to the Caribbean. Before I arrived at the airport that morning I had no idea where we’d be jetting off to. He simply told me to pack for warm weather and the beach. When I finally realized we were headed to Saint Lucia, I was excited, but I admit didn’t know what to expect.

The moment we arrived, I realized we’d be transported directly to paradise. The water was clear blue, the temperature was warm, the island was lush green and had The Pitons (2 mountains that looked like they were designed special for a Hollywood action movie, instead of nature’s doing).

As soon as I announced where we had landed, the messages came rolling in. Apparently, Saint Lucia is the unofficial Honeymoon location for all of my followers, and as soon as we began to explore…I totally understood why!

I truly hope to return one day, while we aren’t in the midst of a pandemic. But the island took great precautions to prevent the spread of disease while still allowing visitors to bask in all the glory it had to offer.

For the first two nights we stayed at Sugar Beach, a newly remodeled hotel that sits right between The Pitons and offers private cottages and a butler. They had several restaurants on site, a private beach and tons of activities to keep you busy.

Our last night was spent at Ladera, and though there isn’t a beach on property or several restaurants to choose from, each room is made of only 3 walls. That means one part of the room is completely open, giving way to the most breathtaking view of the ocean + The Pitons. Our room even had a private pool that allowed us to take a dip at any time of the day while marveling at the beauty God had created.

I would have never known to choose Saint Lucia as our honeymoon location, but it really did end up being Heaven on Earth our first 3 nights as husband + wife!

The Fabric You’ll Live in This Season // Dudley Stephens Jersey