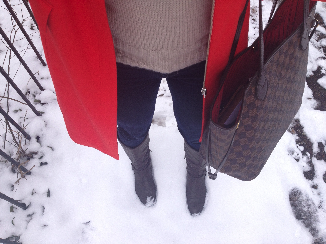 While most of the country doesn’t even blink at 2 inches of snow, Columbia, South Carolina completely shuts down. Literally!

Being that I’ve lived in South Carolina my entire life I’m not the best at dressing for cold weather so I chose to stay in my apartment (in sweats) for most of the week. However, after two days of binge American Greed/Sex and the City watching, I got cabin fever and sick of frozen TV dinners so I decided to put on my best “I’m still going to be fabulous in the cold” outfit including a orange [Zara] Coat, tan Oscar de la Renta cashmere sweater from [Revente Last Call], [7 for all Mankind] jeans, Nine West boots, and venture out into the arctic wilderness that Columbia had become!

Being that the majority of residents had prepared for this snow “storm” as if it were the next apocalypse, most places were closed so my options were slim. Luckily, one of my favorite places to eat was open. Cafe Strudel, located on State Street, is truly a gem. In the last two years I have seen it grow not only in size but in popularity. Although that’s no surprise to me. The food is worthy of a candlelit table, but the atmosphere is more of a cafe (hence their name). I ended up ordering one of their signatures, Duck Nachos! With duck confit, smoked gouda mornay, and sweet chili sauce on top of thick, crispy nacho chips…these nachos reign supreme over any other nachos I have ever had in my life. Yes, its THAT serious. They are definitely a must if you are ever in Columbia.